The Southern Interior Mule Deer Project had a great winter capture season.  Since the fall our team and volunteers have been out checking and moving trail cameras, conducting mortality investigations and capturing and collaring more does and fawns.

In the last couple of months our team added 6 adults and 19 fawns to the West Okanagan study area, 15 adults and 18 fawns in the Boundary study area and 5 adults and 20 fawns to the Cache Creek study area.  Since the program began 2 years ago, we’ve collared 232 deer (including deer whose collars failed or fell off as designed).

Since we started collaring two years ago we’ve collared 232 deer (including collars which failed or fell off as designed).  Part of the project is trying to establish when, where and how our deer die.  Investigations are conducted by the SIMDeer team and volunteers who were trained in 2019. 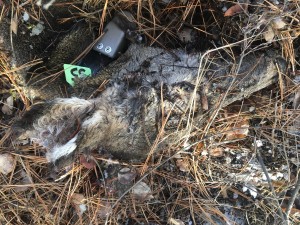 Between April 2018-Jan 2020 West Okanagan adult doe annual survival was 83%, and fawn survival over last winter (December 2018-May 2019) was 61%.  The team is still collecting overwinter fawn survival data for this year; we will have another update this spring.  To date the project has investigated 55 mortalities since the project began.

The breakdown is as follows:

The mortality investigation side of the project is working together with the cougar-prey project (started this winter), led by Siobhan Darlington, PhD student in Dr. Adam Ford’s lab at UBCO.  The project currently has 12 cougars collared across southern BC looking at diet, movement and hunting.  We are looking for volunteers who are willing to be trained to investigate cougar kill sites and set up trail cameras.  To volunteer please email s.darlington@ubc.ca

78% of our deer migrated.  Most deer moved to summer range April-May and returned to winter range in October-Nov.  On average the collared deer migrated 55 kms, with the longest migrant coming from the West Okanagan moving approximately 100 kms.  Most of the deer choose nearly the same path when migrating back to winter range in the fall as when they leave it in the spring.

Following are photos of the necropsy conducted on the doe which was very skinny.  It is presumed she was attacked by a cougar but not killed, and ultimately died of an infection which was caused by the attack.  The deer was emaciated, and its lungs were full of yellow puss. 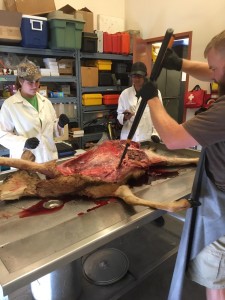 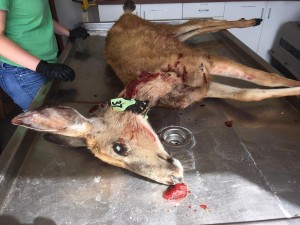 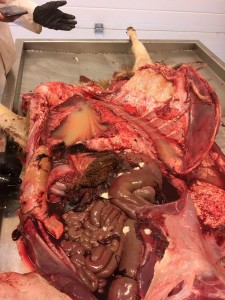 Below is an 8-month clip of her movements and spring migration, including where she ultimately died.

Last summer our team members and volunteers placed 155 cameras out in our three study areas encompassing ~40,000 km2, nearly the size of Switzerland.  Last fall a number of those cameras were moved from summer range to winter range.  The cameras will help us identify relative abundance of predators and prey between our study areas, how the large mammal community responds to landscape change, and competition between ungulates.  This portion of the project is being led by Sam Foster, our PhD candidate with Dr. Sophie Gilbert’s Lab at the University of Idaho.

Last year we had one trail camera stolen, at least five cameras which were damaged, and approximately 30% which had been moved by animals.  Grant Hiebert, one of our super volunteers, has designed a guard for the trail cameras to try to reduce the number of cameras moved/damaged. 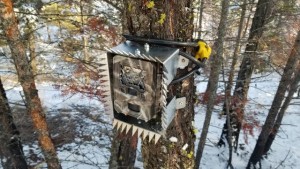 This spring (May/June) we will again be moving our cameras to summer range, topping up batteries, adding guards, and removing data cards.  The project will need more volunteers and additional funding.  We are also aggregating the tens of thousands of pictures so they can be quantified electronically by volunteers.  Camera related costs for this year is estimated at $6000 CDN to replace batteries, repair cameras, purchase replacement cameras, and try the camera guards.

Please send an email to samuelfoster@uidaho.edu to be added to the camera trap volunteer list.  To donate go to the BCWF website and select Southern Interior Mule Deer Project under designation and we will issue you a tax receipt.

The Southern Interior Mule Deer Project is the largest collaborative wildlife research project ever in British Columbia.  It would not happen without our collaborators, funders, and volunteers, a list which is growing longer by the day.

A special shout-out goes to Graham and Bernice Anderson from Clinton, BC who housed and fed our two PhD students Sam Foster and Chloe Wright last fall while they were capturing deer.  Grant Hiebert, from Salmon Arm, has spent countless hours and dollars designing and fabricating clover trap releases, trail camera guards, and moving over 30 trail cameras.  The Siemen clan, from Grand Forks, which has done most of our mortality investigations in the Boundary, housed our team and assisted with capture work.  Finally, our regional trail camera coordinators Grant Hiebert, Dave Carleton and Brian Hancock.

There are nearly 200 volunteers who helped out with the various facets of the project, including some multi-day hikes to place cameras into some of the most remote locations in Southern BC.

Here are a list of the organizations which have funded or volunteered to date:

The BC Wildlife Federation’s Wetlands Institute: Over 20 Years of Success.

Since its conception in 1998, the Wetlands Institute has been held in 18 co...

The female staff at the BCWF

It’s International Women’s Day and we would like to highlight our Direc...

Hear no Evil, See no Evil: The Plight of B.C.’s Salmon and Steelhead stocks

The BC Wildlife Federation and other fish conservation organizations have o...

Bait, it’s one of those things where you can never be too picky. I am not...

A life of Hiking Mountains and Paddling Waters: In Memory of Richard Simpson

Does and Fawns Collared This Winter

At the Heart of the Fraser

Submitted by Jenny Ly Since the BCWF Fall Harvest Celebration, hosted to...

Out In the Woods With a Fisheries Technician

Meet Heather Vainionpaa. She is a Fisheries Technician with a Diploma from...

The Cottonwoods of the Heart of the Fraser

Black cottonwood trees, the biggest poplars on earth and one of the fastest...

Jenny Ly has returned from her Woodland Caribou hunt in Northern BC. This i...

Meet Jenny Ly. She is a young woman living in downtown Vancouver. She loves...

The Dinosaurs of the River

White sturgeon, Acipenser transmontanus, is an ancient species of ray-finne...

Saving the Eulachon of the Fraser

Small, oil-rich smelts called eulachon return to spawn each spring in the F...

The Power of the Pen

Here is Chad on one of his many outdoor adventures. Our next Wildlife Wa...

The Beat of the River

The stretch of the Fraser River that rambles the distance between Hope and...

Thank-you for your Support

On route to our Lake Country Go Wild Camp, our youth programs team were inv...

BC's Full Curl Fishing Experience! The countdown is on for the 2018 Jurass...

Join us at Wildplay Elements Park in Maple Ridge on September 29th, 2018...

https://youtu.be/56K27sOrm-g Having a party and want to serve a deliciou...

Alex Johnson went hunting for the first time in the fall of 2014 at the age...

We were at the Fraser Valley Trout Hatchery on Saturday June 16th, taking i...

Leaping towards a brighter future

Rick Simpson has been the Chair of the BCWF Region 8, fisheries committee f...

Brian Atherton has been the president of the Smithers Bulkley Valley Rod an...

Words from a past president

Les Husband currently, and has been for ten years, the Fire Centre Manager...

Allen McEwan is the president of the Pemberton Valley Wildlife Association...