The Southern Interior Mule Deer project continues to march along, adding additional components to the project and techniques.  This spring saw the deployment of 155 trail cameras across our study areas, and a number of neonate (newborn mule deer) collared shortly after birth.  The following is a brief update of what we’ve done, what we’re doing and how you can get involved. 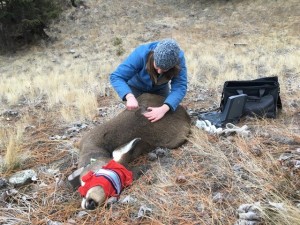 One of the questions we wanted to look at early on was the effect of hunting seasons on populations in the study areas.  One of the first large purchases was two ultrasounds which would allow us to assess pregnancy and twinning rates as well as body condition.  As of spring 2019, our team had documented pregnancy rates of 93% and twinning rates of >69%.  These metrics are both considered very good for mule deer.

This spring, our research team shortened the time between GPS location updates and was able to identify when our pregnant does were clustering (going into labour).  This allowed our team to go in and capture and collar neonates (newborns) to identify survival rates right after fawns are born.  While this technique has seen varied success in North America, it worked very well for our team.

Adult females (does) and juveniles (fawns) are what drive mule deer populations. The good news is our deer are pregnant and have high twinning rates; that means that it is unlikely our buck hunting seasons are having a negative effect on our mule deer population trajectory.  The bad news is, in some of our areas our does seem to have low survival rates.

As of October 2019, we have the following does and yearlings (fawns from spring of 2019) collared in our study areas:

Generally speaking, our deer in the Boundary have very low survival rates, whereas Cache Creek have high survival rates, and the West Okanagan is somewhere in between.  Survival of adult does after the first year of the project was 69% in the Boundary, 95% in Cache Creek, and 83% in the West Okanagan.  We will have a better idea of fawn survival by spring of 2020.  The breakdown of mortality sources in our study areas are as follows:

GPS collared deer help us understand how, when and why our deer move across the landscape.  Over time we hope to gather evidence which will help us advocate to maintain and restore migratory routes, and critical habitat.  Here is a map of the summer and winter ranges in each of our three areas.  These maps included migrations of two randomly selected deer in each study area (black line).

Our longest migrant this year was in the Okanagan, a doe which was collared near Apex Mountain (west of Penticton) last January, and May 1 decided to head for summer range, arriving west of Aspen Grove on May 12th, covering 102 kms in a straight line.

By mid-October this year, nearly all the collared deer in each study area were back in their winter range.

Our team continues to grow as we add funding partners, collaborators, and a growing list of dedicated volunteers.  Volunteer opportunities to date have included baiting deer traps, fixing deer traps, deer capture and collaring deer, mortality investigations, and trail camera placement across our three study areas.  Our volunteers have been amazing spending thousands of hours chipping in where they can.

This spring 40 volunteers were trained up and put out 155 trail cameras across our three study summer areas which encompasses ~40,000 km2. The cameras will be moved twice annually to cover both summer and winter range. This fall volunteers were out pulling memory cards and moving trail cameras to winter range in our study areas.  The effort has been amazing, and we can’t wait to see what the pictures turn up.

The trail cameras will provide valuable insight into the project, including the effect of roads, there density, timber harvest, wildfires on habitat used by mule deer, other ungulates, and their shared predators.

The Southern Interior Mule Deer Project is the largest collaborative project BC has ever had.  Volunteers, the Okanagan Nation Alliance, BC Wildlife Federation and Clubs, Fish, Wildlife and Habitat Branch, University of British Columbia, and University of Idaho have contributed tens of thousands of hours and thousands of dollars to this project.

This does not include well over 100 volunteers who have donated time, experience and funding to help move this project forward.  Without them this project would not have happened.

The project is still looking for funding.  We are currently in the process of funding Sam Foster, PhD candidate at the University of Idaho, whose primary role will be looking at predator and prey occupancy through our trail camera network and how habitat affects our deer.  We are still looking to offset capture costs, mortality investigations, data fees for collared deer, and trail cameras, cards and batteries as well as travel and accommodation.

As we continue to put the pieces together on how, when, where our deer move, which habitats they select, and what the prey and predator communities look like, we will be able to understand how to recover our mule deer populations and advocate for changes in wildlife and land management.  This is foundational work that will benefit mule deer and future generations of conservationists.

If you’re interested in donating to the project, you can do so through the BCWF website. Select Southern Interior Mule Deer Project under designation and we will issue you a tax receipt.  If you’re looking to volunteer, please send an email to southerninteriormuledeer@gmail.com.

The list of volunteers is getting bigger every month, but we are doing our best to try to find opportunities for everyone

BC Budget 2020 Lacks Investment in Water and Wildlife

For Immediate Release Victoria, B.C. - The provincial government has re...

Skeena River, B.C. - The BC Wildlife Federation sent a letter to the Sports...

We welcome the opportunity to participate in this exercise. The review is l...

Ottawa’s “buy back” is a multi-billion boondoggle

“Together for Wildlife”: Urgent Response Needed

The Provincial Government is soliciting feedback on its “Together For Wil...

Big Bar Slide Disaster: What Next?

The BC Wildlife Federation has signed a letter, with other concerned groups...

Submission to the Proposal for changes to the Mines Act

The proposed changes to the Mines Act are a step in the right direction, bu...

Alan Martin – A Champion of Conservation

The BC Wildlife Federation is devastated to inform you that Alan Martin, ou...

Surrey, B.C. - The BC Wildlife Federation is calling for fundamental change...

The B.C. government is seeking ideas on how to create or change current pol...

The Economic Footprint of Hunting, Fishing, Trapping and Sport Shooting in Canada

The Ontario Federation of Anglers and Hunters (OFAH) and the Canadian Sport...

Committee on Finance and Government Services Recognizes Recommendations by the BCWF

Thanks to all the BCWF volunteers who made presentations to the provincial...

Steelhead not to be listed under SARA

The BC Wildlife Federation is hugely disappointed that the Governor in Coun...

Heart of the Fraser Development Stopped!

The BC Wildlife Federation is pleased the provincial government is implemen...

The BC Wildlife Federation has joined more than 110 conservation and recrea...

BCWF Formal Position on the Glyphosates and Other Systemic Herbicides

At the 63rd Annual General Meeting, delegates voted to pass the resolution...

Investing to create a legacy of fish and wildlife diversity and abundance...

New President of the BC Wildlife Federation Elected

Bill Bosch from Kelowna has been elected president of the BC Wildlife Feder...

Government is now conducting a series of public engagement sessions in many...

The recent outcry over hunting contests has arisen due to member frustratio...

The BC Wildlife Federation is aghast at statements being made in a new camp...

The BC Wildlife Federation believes that when predator control is conducted...

Populism and the Ban on the Grizzly Hunt

Several questions have come up after the recent news of a guide outfitting...

The BCWF is in support of the petition to encourage and promote sustainable...

The BCWF has written to the provincial Ministers of Forests and Indigenous...

Fisheries and Oceans Canada’s Deception Over Species at Risk Population

The BC Wildlife Federation and conservation partners have been calling on t...

BCWF Files Submission to Protect Marine Fish at Risk in BC

On behalf of its client, the BC Wildlife Federation, the University of Vict...

On March 23rd, Al Martin, Director of Strategic Initiatives for the BC Wild...

Due to the extreme decline of mature spawning Thompson and Chilcotin River...

The BC Wildlife Federation fully expects the government will direct BC Hydr...

The federal Committee on the Status of Endangered Wildlife in Canada (COSEW...

BC Steelhead Stocks in Crisis

Four groups representing many thousands of recreational anglers in B.C. are...

The BC Wildlife Federation (BCWF) is pleased to announce a Hunting and Fish...