Hunting in the Kootenays this fall?

Be aware that there are mandatory submissions for CWD in highest-risk areas.

Chronic Wasting Disease (CWD) is a fatal prion disease affecting the deer family (cervids). Surveillance for CWD in BC has been ongoing since 2002, with no positive cases. Click below to keep #BCCWDFREE: 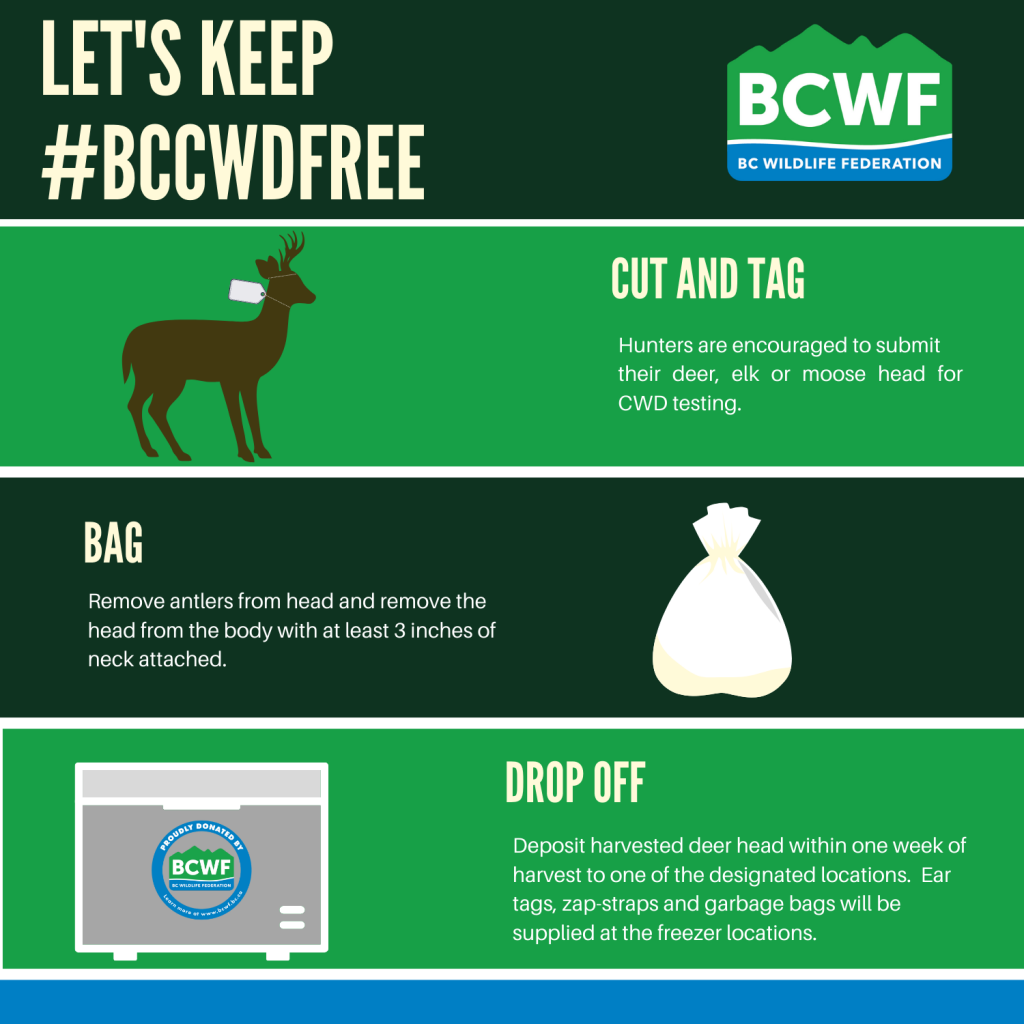 Chronic Wasting Disease...What is it?

Chronic Wasting Disease (CWD) is a degenerative neurological disease that affects species in the deer family (cervids) and is caused by an abnormal protein called a prion. The origins of CWD are not known but the disease was first described in captive mule deer and elk in Colorado and Wyoming in the 1960s, followed by positive diagnoses in free-ranging deer and elk populations.

The B.C. Wildlife Health program has been doing surveillance for CWD in free-ranging cervids since 2002. To date, over 3900 samples have been tested and there have been no CWD positive cases in B.C. Surveillance is key to understanding the disease risk of CWD in British Columbia. For this reason, hunters are encouraged to submit their deer, elk or moose head for CWD testing. This is voluntary in most parts of B.C. Please see above link for more information.

To help this initiative, the B.C. Wildlife Federation purchased and donated ten freezers that were placed at the different drop-off locations throughout the Kootenay and Peace Region. The Federation also had a fundraising campaign during the week leading up to National Hunting, Trapping and Fishing Heritage Day to raise funds to support the efforts to keep B.C. CWD free!

How can you help?

If you hunt in an area outside B.C. that is affected with CWD, please leave the high risk tissues (brain, spinal cord, lymph nodes and organs) where you harvest the animal and return only with the meat, antlers with cleaned skull plate and/or hide (in a sealed container) with all tissue removed.

Surveillance is key to confirm B.C.’s CWD-free status and to detect the disease as early as possible so we can respond in the most effective way possible. Hunters in B.C. are encouraged to submit their cervid heads to the BC CWD Surveillance Program at one of the drop-off locations.

A full list of these drop off locations and more information can be found on the Chronic Wasting Disease government website.

Thank you to the following BCWF affiliated clubs who generously donated to the Hunter Heritage Campaign, supporting our efforts to keep B.C. CWD Free!