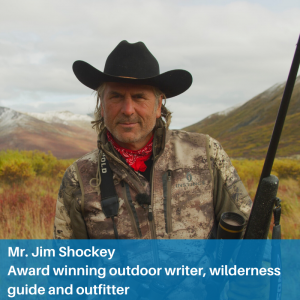 Jim has been an award-winning outdoor writer, wildlife photographer, videographer, naturalist, wilderness guide and outfitter for nearly 30 years. He owns several exclusive outfitting territories in the wild lands of Canada, including the renowned Pacific Rim Guide Territory on Vancouver Island, British Columbia and the famed 12,000 square mile Rogue River Outfitting in the Yukon Territory. His television productions have won 15 Golden Moose Awards from 2009-2015, and he is accomplished in archery, muzzleloader and rifle. He is a retired Honorary Lieutenant Colonel of 4 Canadian Ranger Patrol Group (4CRPG) Canadian Armed Forces and is a Member International of the Explorer’s Club in New York City, and works in production with his entire family—Louise, Eva and Branlin.

Alexandra Morton is an independent biologist based in the Broughton Archipe...

Doug Routley was re-elected as the MLA for Nanaimo-North Cowichan in 2017...

Andrew Trites is a Professor and Director of the Marine Mammal Research Uni...

Jennifer Davis is the Provincial Director of Fish and Aquatic Habitat Branc...

Scott Hinch is a Professor in Fisheries Conservation at UBC.  He is an exp...

Dave Hamilton has spent the majority of his career working in the forest in...

Andrew Wilson became President of the Freshwater Fisheries Society in 2015...

Prior to joining the Pacific Salmon Foundation, Brian worked for 30 years i...