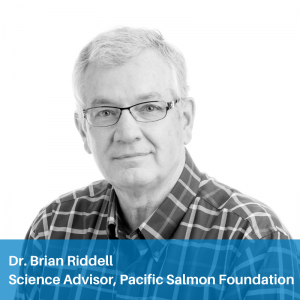 Brian is also a Commissioner for Canada to the Pacific Salmon Commission and has served as a member of the Royal Society of Canada’s Expert Panel on Ocean Climate Change and Marine Biodiversity; was a member of the Province of BC’s Minister of Agriculture’s Advisory Council on Finfish Aquaculture (2018), and mostly joined the Board of Directors for the new Salish Sea Institute, Western Washington University.

In 2018, Brian was awarded the Murray Newman Award for Marine Conservation (Vancouver Aquarium), was inducted into the Fraser River Hall of Fame, and received the Larry Rutter Award for contributions to the Pacific Salmon Treaty.

Jim has been an award-winning outdoor writer, wildlife photographer, videog...

Alexandra Morton is an independent biologist based in the Broughton Archipe...

Doug Routley was re-elected as the MLA for Nanaimo-North Cowichan in 2017...

Andrew Trites is a Professor and Director of the Marine Mammal Research Uni...

Jennifer Davis is the Provincial Director of Fish and Aquatic Habitat Branc...

Scott Hinch is a Professor in Fisheries Conservation at UBC.  He is an exp...

Dave Hamilton has spent the majority of his career working in the forest in...

Andrew Wilson became President of the Freshwater Fisheries Society in 2015...